The family of Azure IoT resources is very diverse. If you know what you are doing and have developers available you can have a great time with the many PaaS cloud resources.

If you have devices which need internet connectivity but you have no developers, you can check out IoT Central, the SaaS IoT solution.

Recently, Microsoft announced a very powerful integration with other leading IoT Platforms like SAP Leonardo and PTC Thingworx. Both can connect directly with the Azure IoT Hub, the cloud gateway. This opens a broad range of integration opportunities.

And last but not least, you can start with prebuild verticals, Azure IoT accelerators, formerly known as Azure IoT suites. If you have developers available but you do not want to start from scratch, check them out. You can deploy a typical accelerator in 15 minutes to see how they behave. And the smart thing is, all the code behind the logic is available for free on Github.

The most known accelerators are:

But there are also third-party accelerators.

If you are a developer or architect, it’s time well spend checking them out!

The remote monitoring is a good starting point, it has a lot of out-of-the-box features: 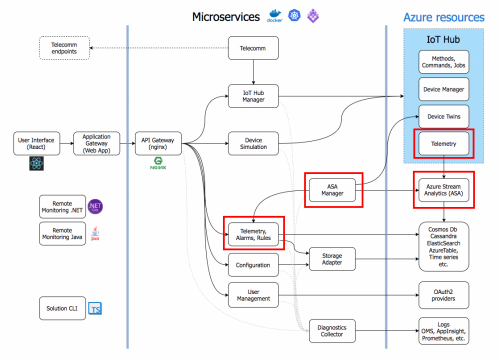 In one of our current projects, we were looking for a rule engine. And while playing with the demo of the Remote Monitoring Accelerator, we stumbled on one.

The picture shown above is not really helping to explain how this rule engine works and you can try to read about it or check out the code on GitHub.

The features of this rules engine are both simple and powerful:

And the best feature is that the rules engine is based on Azure Stream Analytics. Therefore it’s modular and it can be separated and reused completely in your own solution.

In this blog, we will see how it’s done.