Update: Recently, Microsoft introduced the new V2 version of their IoT Edge. This blog is referencing the former but still supported V1.

When the Azure IoT Platform is referenced, in most cases the devices connecting to the IoT Hub are capable of communicating directly with the internet using Wifi etc. But there are many cases where devices are not capable of reaching out to an IoT Hub.

For example, these devices lack the ability to communicate using the internet (but use eg. Bluetooth or I2C instead). Or these devices are capable of communicating eg. REST but simply disconnected from the internet. Or they can only reach their own platform (eg. LORA).

In these cases, you need a mediator, a gateway. It sits between the two parties and passes data back and forth.

But the name change (from ‘gateway‘ to ‘iot edge’) is not without reason. The Edge SDK has extended logic and is currently in preview. The additions to come will make it possible to run logic on-premise (according to the website: Enable real-time decisions, Perform edge analytics, Run artificial intelligence at the edge, etc.). This is promising!

But I have experienced the usage of the Gateway SDK as a challenge. The SDK supports many development platforms and documentation is scattered. So it’s hard to find a good starting point.

We will start with the Gateway SDK. I want to make the usage of this SDK as easy as possible.

This blog is the first part of a series:

The team behind the Gateway SDK is promoting the SDK at multiple locations on the internet:

That’s great but I am also forced to think about which language to use:

This was very confusing at first.

Now knowing how the gateway is organized and having it running on an actual device, connected to real sensors, it’s less overwhelming.

In this series, we will use the .Net native framework version. I have an actual gateway running Windows 7 Embedded so this was my first choice.

The architecture, sort of

Before we look at the actual coding, first we check out the architecture. This is a simplified model of the gateway:

The three blocks are called ‘modules’. There are various pre-compiled/pre-programmed modules already available for various operating systems. and you can build them yourself. In our case, in .Net, these modules are available as classes in DLL’s.

But DLL cannot run automatically. To run these modules, we need a runtime:

This is a more detailed architecture. A broker exchanges messages from module to module. Messages are filled with content which is actual data from (simulated) devices. It must be clear modules are put after each other with a certain intent. Modules cannot be hustled. Each module has a certain job (eg. ingests, filters, logs, sends data to an IotHub, has knowledge about device connection strings) so there are rules on how to use them.

It must be clear modules are put in a certain order (and passing messages) with a certain intent. Modules cannot be hustled. Each module has a certain job (eg. ingests, filters, logs, sends data to an IotHub, having knowledge about device connection strings) so there are rules on how to use them.

In our case, we need a runtime named ‘gw.exe’, a console app. Later on, we will see how we get that one. And when this runtime is started, it needs some configuration, written in a file.

In this configuration file, having a specified format, two sections are available:

This is a simple broker concept, now let’s look at the messages passed:

A message is sent between modules. It must be clear a regular message contains two parts:

Note: so modules read the properties and maybe add some and/or deletes some. For an extended example, look at the documentation of the mapper module. We will look at this module in detail on the next blog.

This is a nice story. But where to start? There are already some (pre-configured) examples provided by Microsoft, here we build one from the ground up.

Then, add a NuGet gateway package using the filter ‘azure.devices.gateway‘:

Note: pick the one for native windows

Once the NuGet package is loaded, it seems no references are added! What was the content of this package, actually?

Just compile the (empty) library and navigate to the \bin\debug output path:

What we see here is a combination of the runtime (gw.exe) and a complete collection of pre-compiled and ready-to-use modules. Most of these modules will be handled on my next blog.

Transforming our class library into a gateway

The answer is simple, we alter the start action of our class library. Go to the properties of the class library and open the Debug tab:

From now on, if we compile and start our class library, we will actually start the executable.

In the previous paragraph, we learned the gateway needs both (compiled) modules and a configuration file. The modules are provided in the same folder, reflection can be used to get them. But the gw.exe needs a JSON file:

So the next step is to construct this gateway configuration file.

The configuration file is just a JSON file. And to demonstrate how to fill it, I first looked at the list of available modules:

Maybe there are even more modules but these I recognize from the SDK module list.

Just to show how modules behave, I only picked the ‘simulated device’ module which generated some telemetry. And we will write a new module using C# which writes the message received from the simulated device into the console.

So the config file needs the following parts:

This is the complete configuration:

Note: although defined, our own module is not built yet so do not expect this will execute already. Be patient 🙂

We can make several observations:

So save this JSON file named ‘modules.json’ in the project and mark it as ‘copy always’: 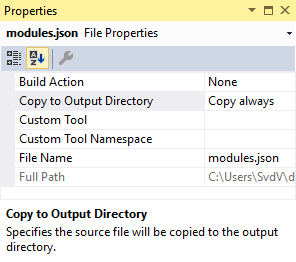 Next time we compile our library, the JSON file is put next to ‘gw.exe’ and our gateway is ready to run.

We need one more thing to do, writing our own module.

Yes, this printer module is not unique.There are several others to be found in the documentation. But my module is a little bit more descriptive and therefore more useful compared to other blogs!

Add a class file and fill it with this code:

Again, there are several observations to be made:

We are now ready to run our gateway.

Note: during execution, we can still debug the module. Add a breakpoint if you want to.

Bringing all pieces together

We can see the message content: “{“temperature”: 10.00}” which is correct JSON message.

And the properties are:

In the next blog, we will see that multiple modules provide a property ‘source’. This way, a module which receives a message can trace back where the message is coming from.

Note: this printer module could be placed after multiple modules

You can stop the gateway just by giving the DOSBox an ‘enter’.

That was not so hard, after all. And now we all know which parts a gateway is made of.

In my next blog, we will actually send some telemetry to an IoT Hub!

4 gedachten over “Introduction to the IoT Edge SDK V1, part 1: the modules”